Within all cattle studs there are animals that form the nucleus of the herd. Below are a selection of the cattle that formed the basis of Cruachan Highland Cattle, and this is their story. None of them are alive today but their genetics live on within the current Cruachan herd. 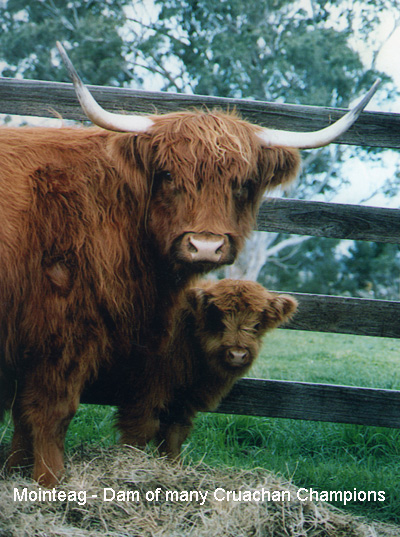 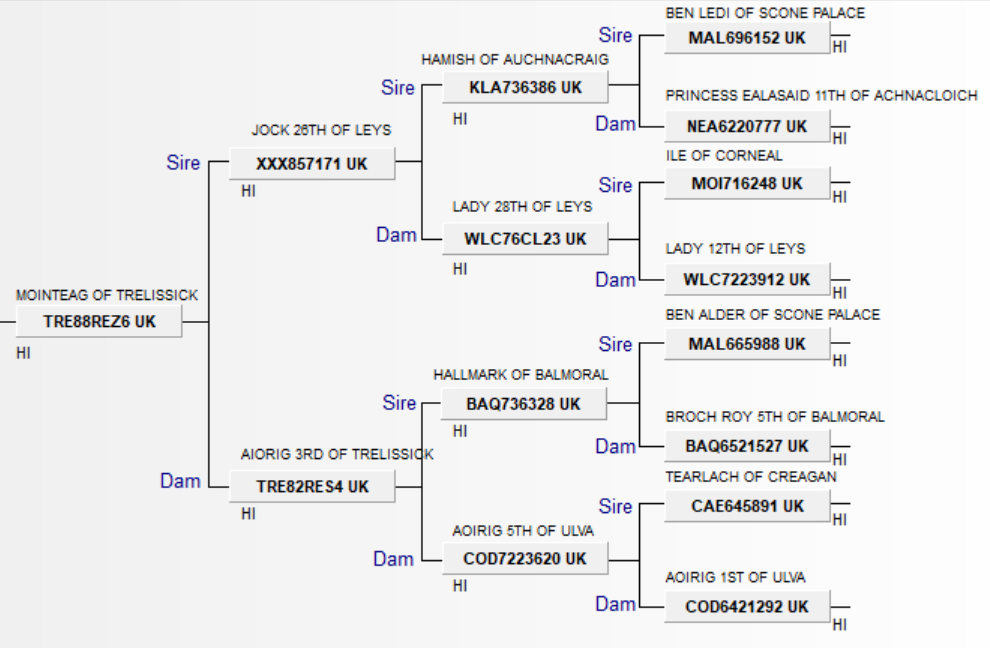 Mointeag was purchased from the Trelissick Fold owned by Mr. John Reid, Walter Peak, New Zealand and imported to Australia in 1989 as a heifer at 11 months old.   Fifteen years later, in 2004, her Grand-son was to return to NZ as a Herd Sire for Trelissick Fold ... see Hamish of Cruachan later in this page.

This beautiful lady was the most influential force in the foundation of our herd. Several of her progeny have won championship ribbons.

Temperament is an important factor.
Mointeag with my youngest daughter, Catriona (1990) 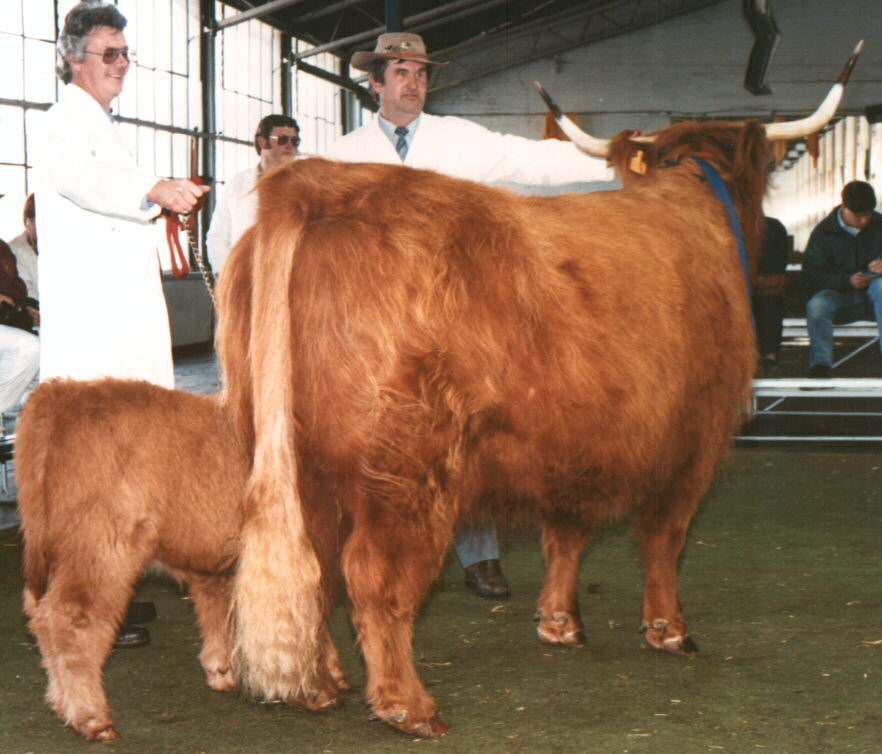 Mointeag showing her beef qualities which she readily passed on to her progeny.

During the early 1990's we ran a number of embryo programs using Mointeag of Trelissick as the Dam and various AI bulls from Scotland, America and Canada.

James was the result of using Jock of Cullerne, a Scottish bull, over Mointeag. It proved to be an excellent combination and James won many ribbons on the show circuit. His semen has been used extensivley in both Australia and New Zealand. 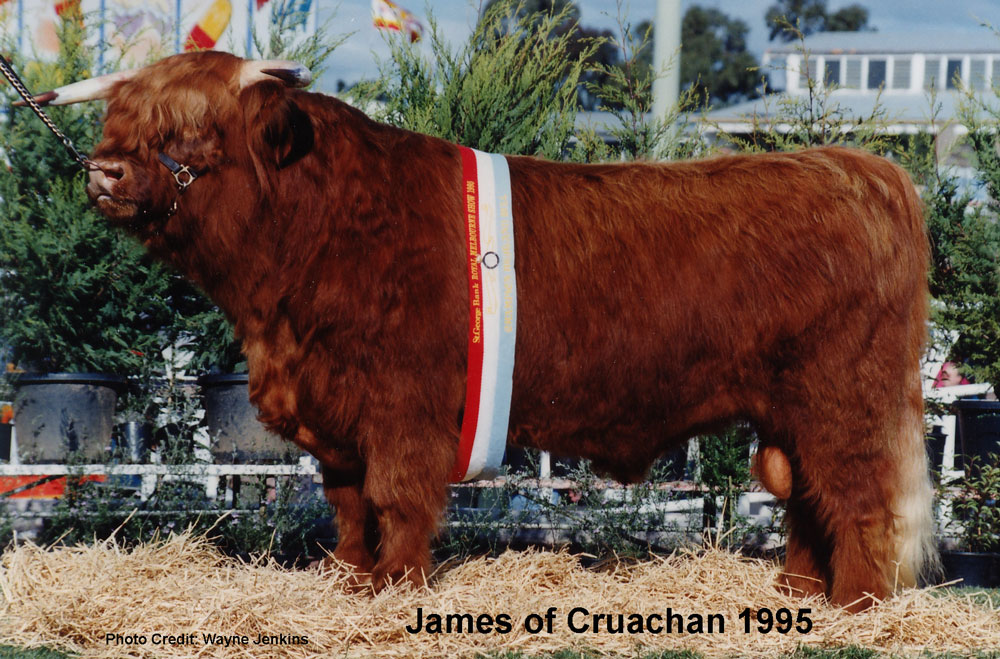 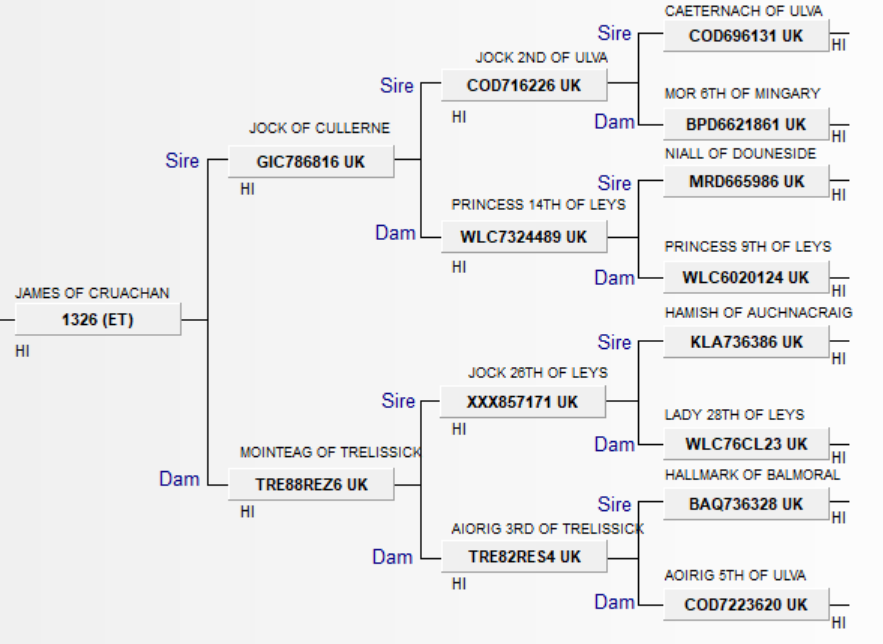 James of Cruachan was considered by many to be one of the best bulls in Australia at the time.   In fact, in 1995, one of the most prominent Highland Breeders in Australia offered to buy James with the intent to ship him to Scotland, once there he would have been shown and had semen collected.  It was going to be a "one way ticket" for James so we decided to refuse the generous offer.

You can visit our James Semen Sales page for more info on James and how to purchase semen in both Australia and New Zealand. 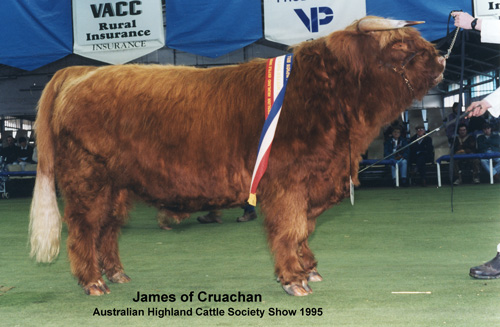 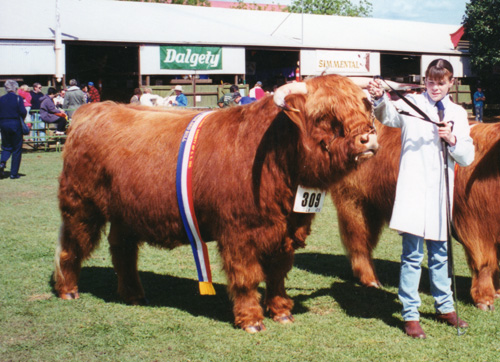 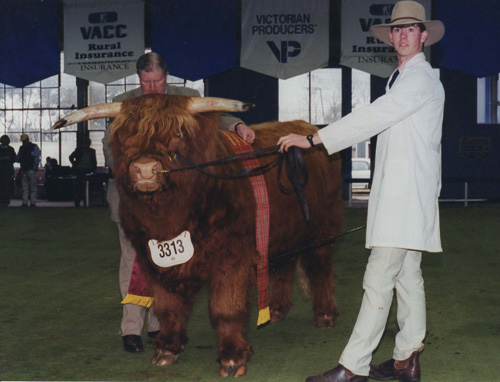 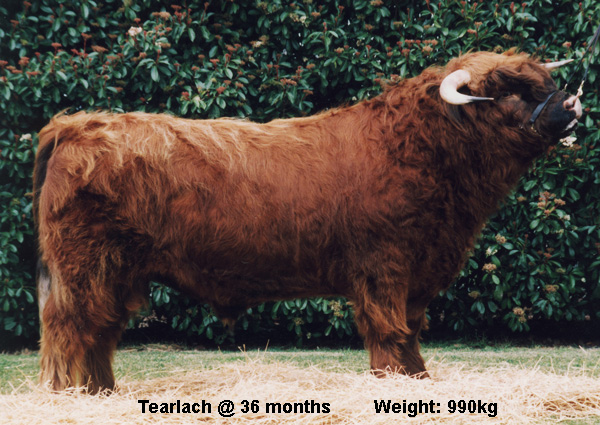 August 1998 at the AHCS Winter Show 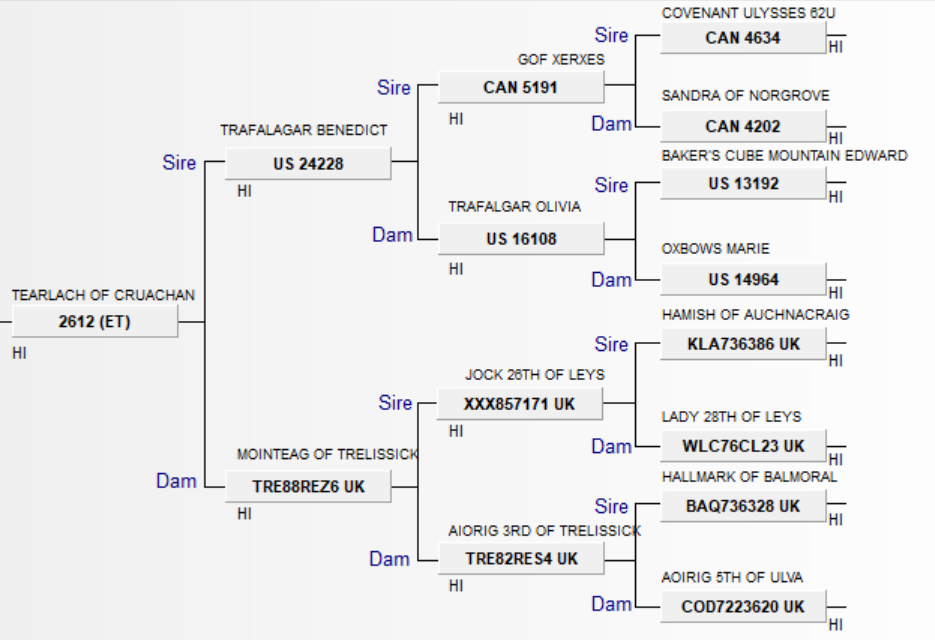 Tearlach of Cruachan, or Charlie as he was affectionately known, was a one off.  We had never had a bull of such stature and we have never had one since.

Once again Mointeag of Trelissick was the Dam and the Sire was Trafalgar Benedict, a sire whose semen we had imported from the USA.   It was later made available for use here in Australia.

Charlie was such a gentle bull from day one, as can be seen in the pictures below below. 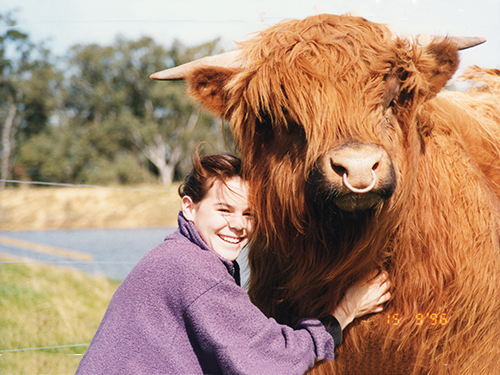 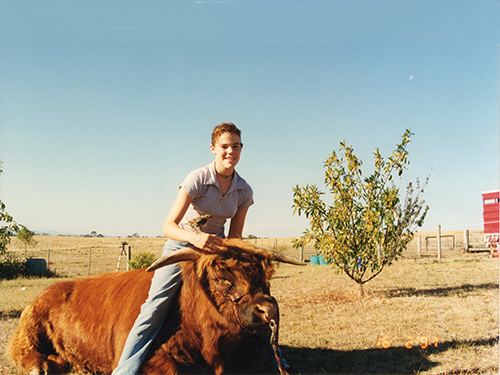 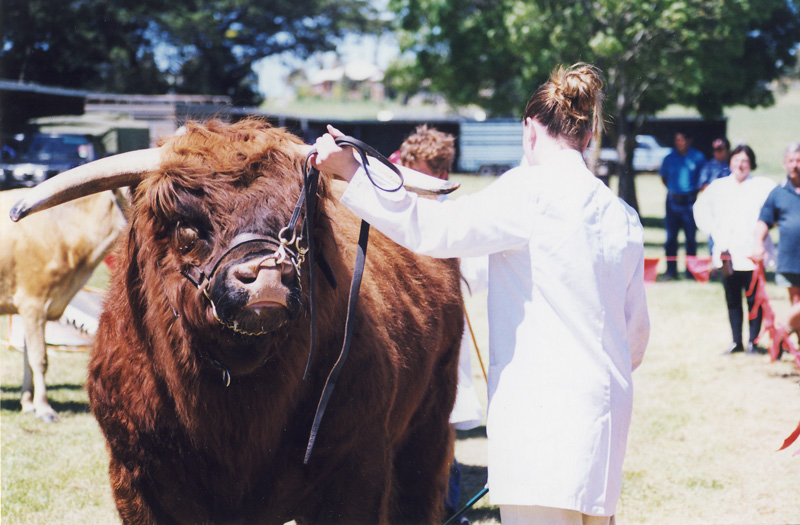 My  youngest daughter, Catriona, is a tall girl and the photo above gives an idea of Charlie's size at 990kg  at the time when shown at the local show in Maffra, Victoria. 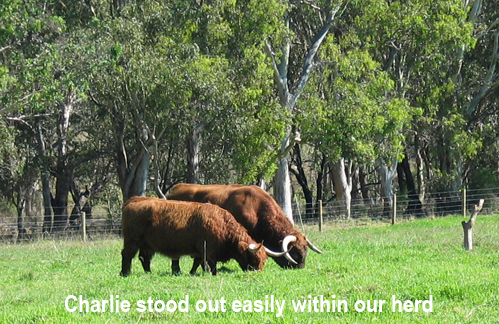 When Charlie was a mature bull at around five years of age he weighed in at 1060kg in "paddock condition". At frame score 6 he stood out easily within our herd. 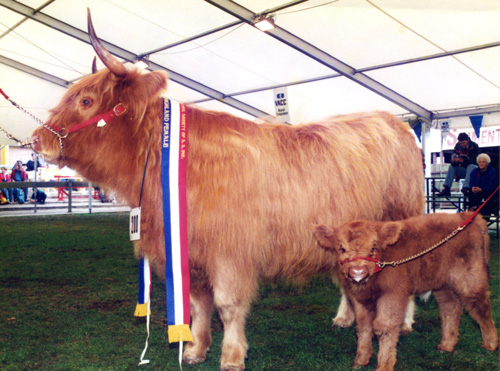 Ban-Laoch was the result of embryo transfer using an embryo from Canada.   Her dam had only produced one embryo and so we were very lucky to be able to get a pregnancy.

In the early days we sold on all her progeny and before we knew it we had not kept any for ourselves.

Luckily prior to selling Hamish we had used him over one our best cows and the resultant heifer calf went on to produce many great breeding cows and bulls for Cruachan Highland Cattle. 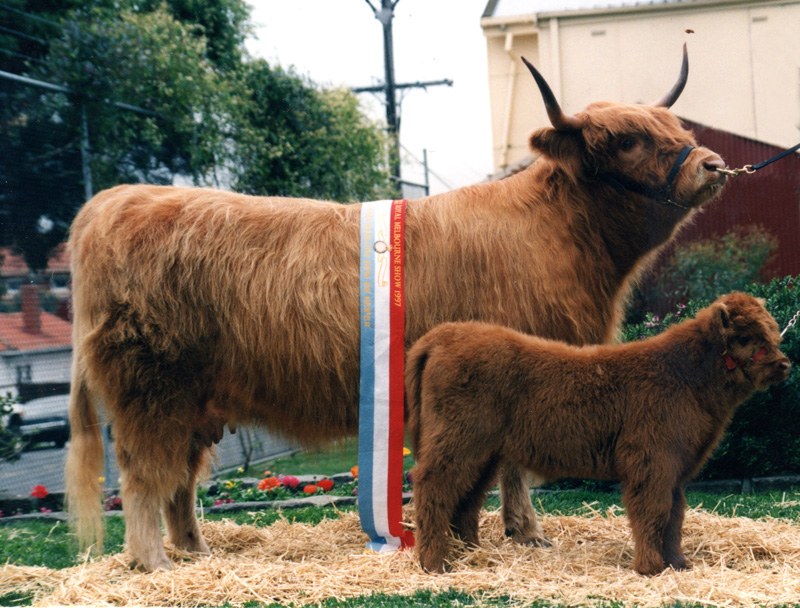 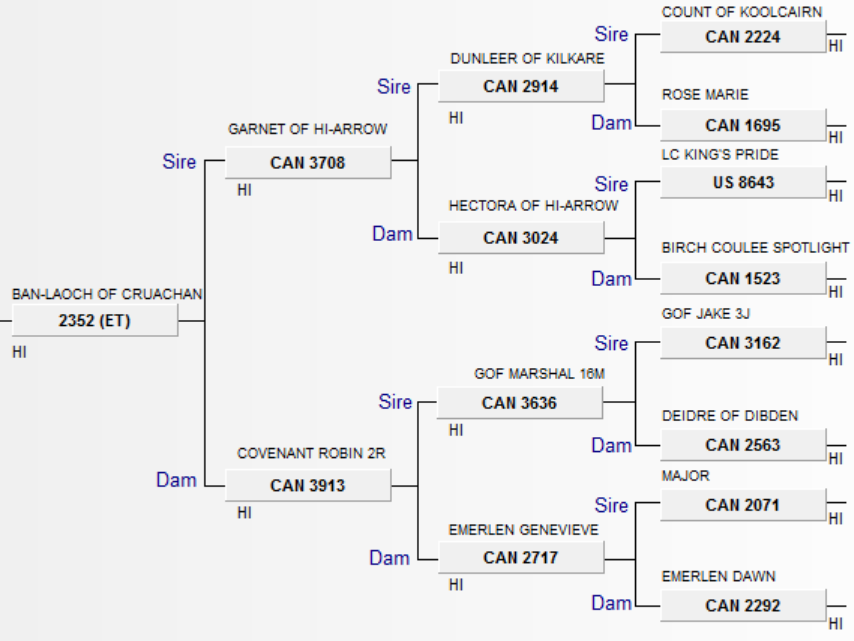 At Adelaide Hamish was  just 10 days old. When he got to Melbourne several weeks later he was a seasoned show animal, as can been seen by the way he stands. Hamish was a great bull and was eventually exported to New Zealand. 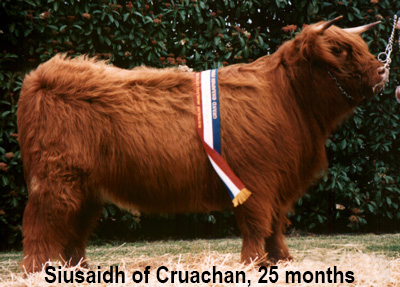 Siusaidh, pronounced "Shoo - see", was a very good example of a Highland Heifer with a fully Scottish Pedigree.

Siusaidh of Cruachan won a number of top ribbons in the year she was in the show circuit.

She went on to become one of the mainstays of our herd and her progeny still exist within our herd today. 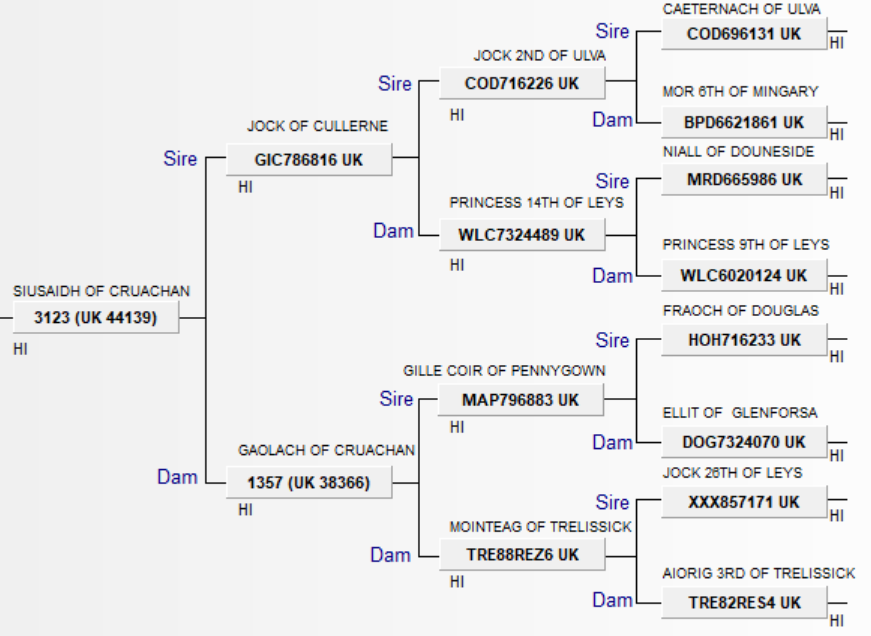 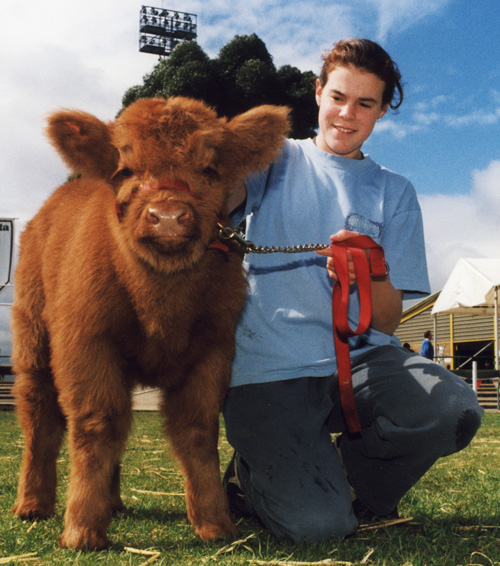 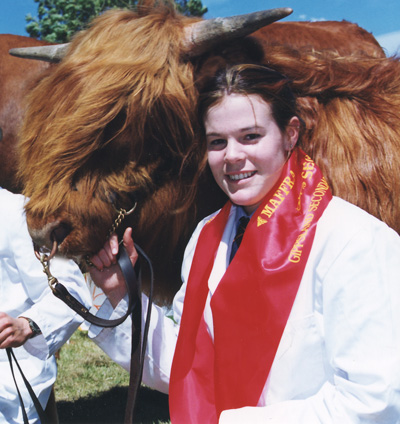 By this time Hamish had already attended both Royal Adelaide and Royal Melbourne Shows travelling over 2000 kilometeres in round trips to do so.

This made him a seasoned traveller but it was nothing in relation to what was about to occur 6 years later ... see below

Hamish with Jeff and Sue Boland. 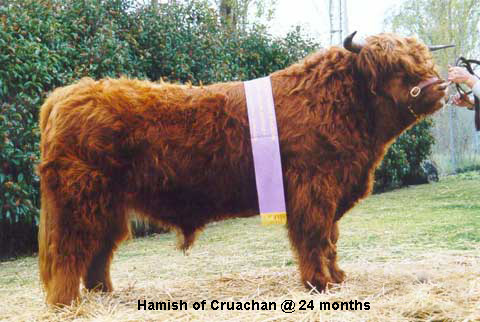 Hamish was sold in November 1998  to Jeff and Sue Boland, Claremont Highland Cattle, Clunes, Victoria.  Jeff and Sue continued to Show Hamish, pictured above in 1999.

Henry and Beth Prescott-Ballagh, Canterbury, New Zealand own Abberly Fold and purchased Hamish of Cruachan from Jeff and Sue Boland in 2004.

"We had been looking for a new herd sire for the Abberley fold and liked the genetics and style of James of Cruachan (owned by Mr. Bill Wilson) which we tried to secure for our New Zealand Fold, but to our dismay "James" had passed away, so we asked Bill who was James's best son, and was he for sale. Many phone calls later contact was finally made with Jeff and Sue Boland, who owned Hamish of Cruachan. Initially they had not thought of selling Hamish but thought the idea of him going to New Zealand had merit and they would consider the proposal on the condition that we physically inspected Hamish first."

"A great opportunity to meet Hamish, Jeff and Sue was the 2004 National Highland Show in Melbourne Australia. Needless to say that once meeting Jeff and Sue Boland of Claremont Highland Stud in Clunes, Victoria and seeing Hamish’s progeny I knew we were on the right track and we just had to have him. My wife was right, he was perfect to take our Fold to the next level." 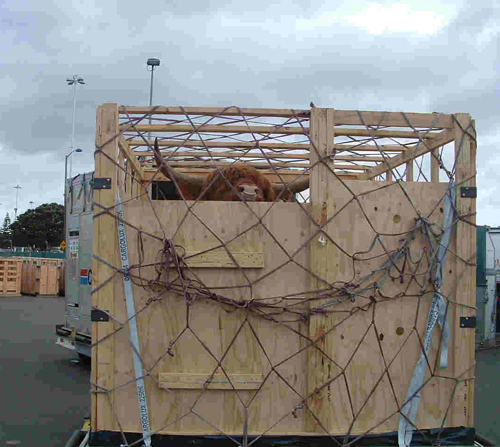 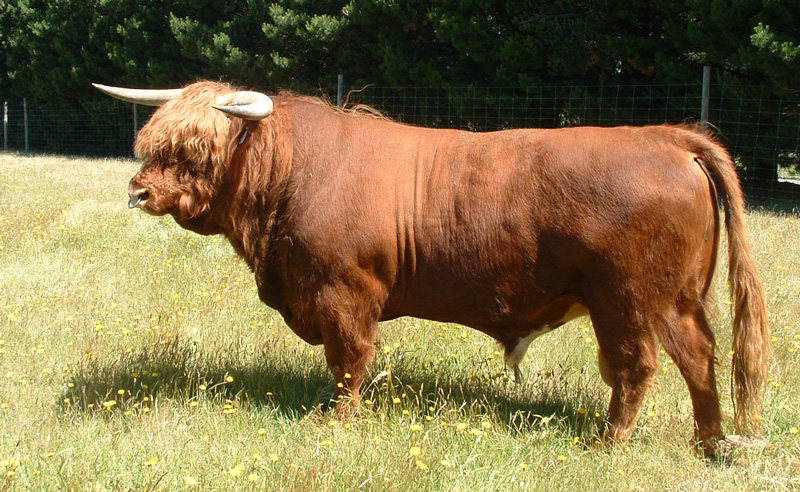 "We gave Hamish 21 days rest to help him get over his jet lag and acclimatize to New Zealand weather conditions. Hamish was then put out with 36 Full Blood Highland cows belonging to the famous Trelissick Fold which Beth and I have the privilege of managing.  From here a select number of Abberley Fold Cows (and Hamish is still smiling just like us)." 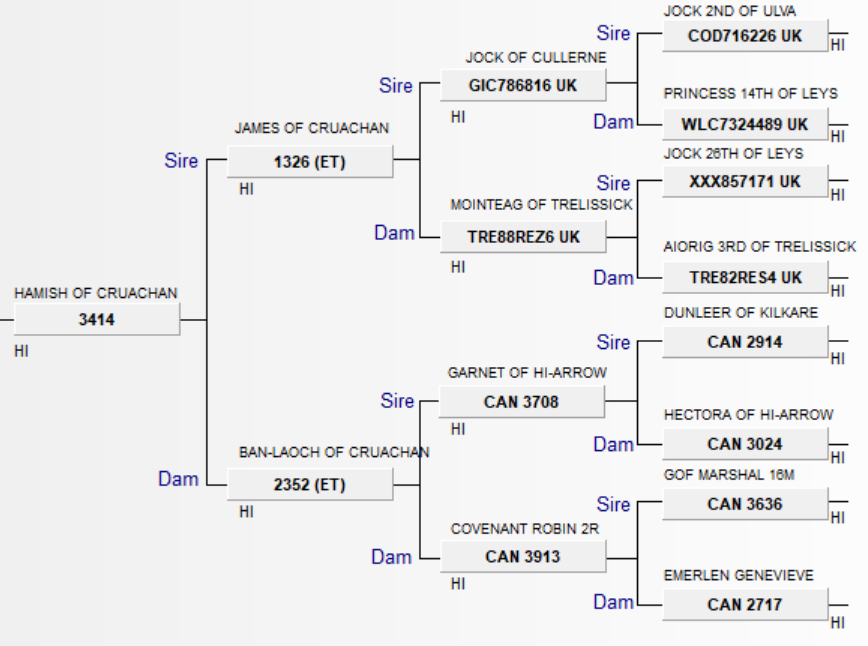 All the cattle in the photos above are no longer with us. However, their genetics live on in the bull and heifer pictured below.