Native to the Highlands of Scotland, these hardy animals with their grand head, large spreading horns and shaggy coat of various colours, possess a nobility unrivalled by other breeds of cattle. Adapted to withstand the rigours of winter in the north of Scotland, Highland cattle, for years thought of as decorative rather than profitable, are enjoying a resurgence of commercial interest. In the UK, Europe and North America, and now in Australia, beef producers are realizing the advantages of their ruggedness, their wonderful calving percentages and their high proportion of quality beef.

Highland cattle have survived in their ancient form with little interference from man. Because of their shaggy coats and thick hides they have been able to survive in harsh conditions producing a quality carcase, without excess surface fat needed to insulate their bodies. The result is a carcase without excess selvage fat and low cholesterol and flavoursome beef.

WHAT THE HIGHLAND CARCASS RESULTS SHOW: 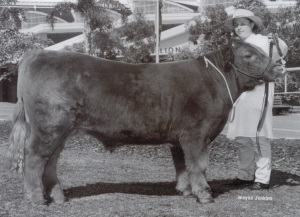 ABOVE: 2001 Sydney Royal Easter Show Middle Weight Highland steer. His carcase score of 87 points included full marks for marbling and eye muscle, one of only five carcases across the competition to do so. Of these five, his overall score was beaten only by the Grand Champion and Champion Middle Weight Carcase. (Courtesy: Susan Elder)

Highland cattle are increasingly being recognized in Australia for their marbling attributes. Marbling is closely associated with the key meat qualities of tenderness, juiciness and flavour.

The Shows where Highland carcases scored the top marks for marbling:

QUESTION:
In 2001, which cattle breed confounded its critics and won four ribbons in the carcase sections at Royal Canberra and Sydney Royal Easter Shows with scores of 87, 84.5, 84 and 82.5?

ANSWER:
Highland cattle, the breed that proves that big is not always best.